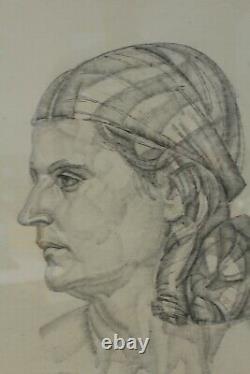 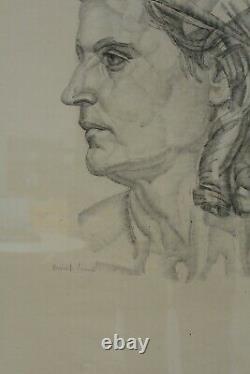 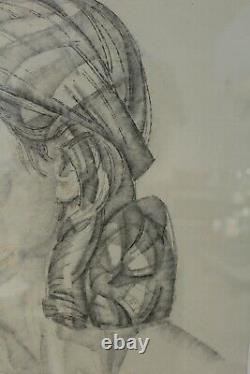 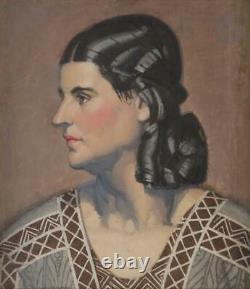 Seen 61 x 46 cm. This drawing is to be compared with a portrait of a woman put on sale at ader on January 26, 2021, portrait of Madame Lenoir? Born into a goldsmith's family, marcel-lenoir went to Paris in 1889. He attended the school of decorative arts there.

And the classes of the frisquist paul Baudoüin. At the National High School of Fine Arts. Then discover the artists of the Middle Ages. French and Italian at the museum of cluny. Then at the Museum of the Louvain.

He will associate with the strong paul poet. At the same time he discovers the works of the Swiss arnold böcklin.

Powerful colorist whose material effects evoke fawns. In perpetual search for new stylistic solutions, his work is a search for a golden age that has never stopped browsing French painting since the end of the year. Having reached the notoriety of his lifetime, he is now one of these neglected artists, it is true that his intransigent and even provocative attitude to the excess will not favor its diffusion. In his personal life he practised material austerity and even indigence with sincerity, and he continued to mock critics and official institutions.

Eccentric figure walking in Montparnasse. For artistic cabaret, he was of an ambition above his strength and haunted of inaccessible grandeur. In 1908, it appeared to the presses of the abbey of Creteil. A book entitled reason or deraison of the painter marcel-lenoir; no doubt he frequented this phanaster. In 1913 he moved to Bruniquel. Renting a barn, set up a team of six masons to work on its large frescoes. He made 27 frescoes in 1916.

It changes technique and the composition of its mortar which will give its work a great softness in the tones. 115 of the street our lady-of-the-fields.

In Paris and in the following year, he made an exhibition-manifest, publishing a catalogue showing his portrait on the cover by chana orloff. He transfers this workshop to.

86 of the same street in 1928, right next to that of light fernand. He teaches the art of frescoes and entrusts the art of paul-butt engraving. Many creators will receive quality education, such as claude dubois stone. Who will export his knowledge as a frisquist to the mexico, the Yugoslav licenoski-lasar, the Croats jozo kljakovic and ivo resek, of the Brazilian antonio gomide. In 1920, he received the commission of the coronation of the virgin (1923) for the Catholic Institute of Toulouse, on which he worked with his students.

He included a series of portraits of the city's notables, as well as his own portrait and those of his wife and son. It is represented as a priest, at the head of the procession. Other toulous personalities or his acquaintances like camille soula. Henri de lingua de saint-blanquat.

And rest in the Pechcausen Cemetery. He was married and father of family. The item "Marcel Lenoir (1872-1931), portrait of woman, charcoal on paper, signed, framed" has been on sale since Tuesday, November 23, 2021.

It is in the category "art, antiques\art of xxe, contemporary\designs, lavis". The seller is "trazbon" and is located at/in armbouts calle. This item can be shipped to the following country: france.