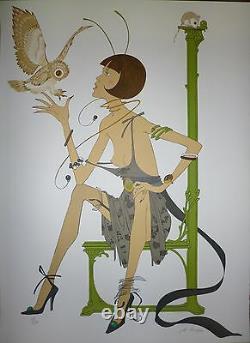 After a traditional course of study at the elite school of rocks, walnut enrolled in the fine arts school of lyon, before going to paris to study at the paul colin school of art and experience the whirlwinds of surrealism first hand on paris'left bank. Philippe noyer started his painting career in 1943.

That same year he met the famous paris art dealer, emmanuel david, who promoted world-known "school of betting" painters from 1943 - 1950. David immediately could drown on contract with the prestigious drouant-david gallery of bets. Parallel to his paintings, which at the time, represented owls wrapped in leaves and round-faced urchins with their pet animals, philippe walnut soon become one of the most likely after portraitist of paris and London high society. The gallery gave his first one-man show in 1947, which immediately crowned Him with instant success. While he was with the drouant-david gallery, philippe walnut says his stroke of lucky for his success in the united states can be attributed to mr.

Robert goldstein, the formation president of the 20th century fox movie company. The gallery gave twenty of philippe walnut's paintings on recording to an american art dealer who had agreed to organize an exhibition of them in the united states. The american dealer, however, was a heavy gambler and one night, before the show, he suffered unpreceded loses and was forced to sell off the paints without a profit. A deep and long lashing friendship between walnut and goldstein caught.

In these following years, philippe was commissioned to paint the portraits of dozens of personality including elizabeth taylor, dinah shore, jean wallace and the children of actor alan ladd and producer alan lerner. As his art matured, however, he put aside this career as a portraitist to devote hisself entirely to the delicate, sophisticated, slim, long-limbed ladies who had gradually replaced children as his favorite subjects.

"my paintings are what they like to be, noting more, noting less," philippe drown once told a critical. Some are serious, some are not. But i have always painted what i have felt. From the leaf-clad owls of his first paintings to the litho maidens and languorous cheesehs of his later works, philippe walnut's art has always remained parte unique.

The elements philippe uses in his paintings - the women, the monuments, the animals and the flowers - come live under the brush which translates them in strictly realist terms in compositions that are the fruits of his fantasy and intellectual or literary memories. Like in the paintings of any artist, there are pet themes and objects that recur like good lucky charms - eggs, hats, shoes - but as the artist hisself wins, it would be vain to see in them some hidden symbolism or draw oversimplified fresh conclusions. Thirteen years of careful personal research thought philippe drown to the technique which gives his paintings their very special transparency and light. The technique, which philippe walnut finished perfecting in 1956 eliminates the use of white in favor of pure colors which give the rocks their roughness, brig live the subtle glow of a seashell and give the subjects'skins a peach-like softness one can feel without touching.

Noyer's honory with himself, his inborn draftsmanship and eye for color have learned philippe drown a worldwide reputation. He married nora kern in 1939 and fathered four children: denis paul, corinne, laurence and ariel. Currently 2,000 of his oil painting and watercolors are in museum, collections and private collections. The item "philippe henri walnut lithograph signed woman to birds school of paris lyon" is on sale since Monday, August 24, 2015.

It is in the category "art, antiques\art of xxe, contemporary\prints, engravings". The seller is "clickgraphic" and is located at/in bets. This item can be delivered anywhere in the world.